The Rev Edward Irving, son of tanner Gavin Irving and Mary Lowther, was born in Butts Street, Annan. Educated at Annan Academy and Edinburgh University, he was licensed to preach in Kirkcaldy in 1815.  From 1818 until 1821 he was Assistant to Thomas Chalmers and the following year was ordained in Annan, where he had preached his first sermon. He was called to the Caledonian Chapel in Hatton Garden, London, drawing crowds of thousands. In 1823 he married Isabella Martin (1797-1854).

Irving was excommunicated by the Presbytery of London in 1830 for publishing his doctrines of the humanity of Jesus Christ. Following a trial in Annan Old Parish Church on 13 March 1833 he was found guilty of heresy and deposed. Before returning to London, he preached to large crowds. He was ordained in London as an Angel in the Catholic Apostolic Church.  Moving to Glasgow, Edward Irving died the following year and was buried in the crypt of Glasgow Cathedral.

A statue by sculptor James Dods was originally erected in front of Annan Town Hall. It is now in the grounds of Annan Old Parish Church. There is a plaque and memorial window in Glasgow Cathedral. 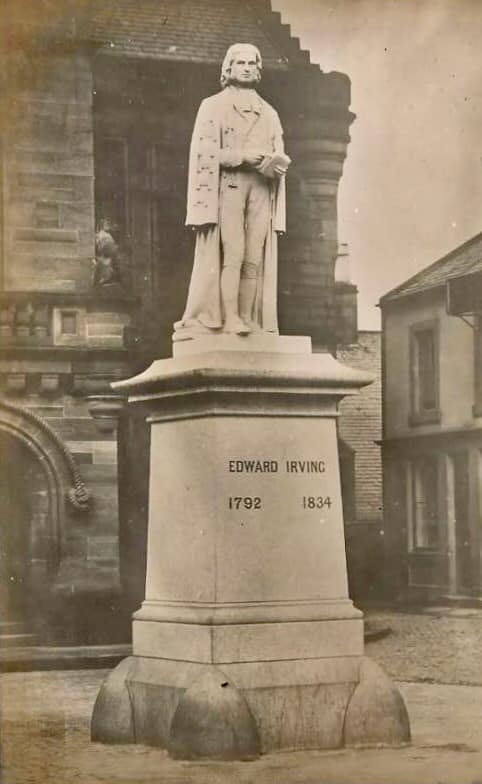 Leading Scottish artist in last quarter of 19th century; 400 works known, 29 exhibited in Royal Academy exhibitions, 141 in the Royal Scottish Academy exhibitions, 30 paintings now in Scottish galleries, 6 in Annan Museum and 2 in Annan Town Hall. Official artist in Westminster Abbey for Queen Victoria’s Golden Jubilee service in 1887, resulting in one of the largest paintings in the Royal Collection. It contains 278 portraits and took three years to paint, at 92 x 120 inches (centre photograph).

Born in Eaglesfield, illegitimate son of two of workers at Scottsbrig, the farm of Carlyle’s brother, Ann Lockhart and William Ewart. He was brought up in Annan by Lockhart grandparents at Orchard Fold in Bruce Street, on which there is a plaque.  Attended Annan Public School, and aged 14 given a place at Royal Scottish Academy Schools in Edinburgh, where he was given lodgings in home of Dr John Carlyle, brother of Thomas. Had first work shown in 1861 at Royal Glasgow Institute of Fine Art exhibition, aged 15. Had TB, and RSA paid for him to go to Australia for 3 years, 1863- 66, which cured him.

Rapid rise in popularity, best work considered to be watercolour, mainly Scottish east coast scenes and illustrating Scottish history, many turned into engravings e.g. for R.L.Stevenson’s  Notes on  Edinburgh. Weak health meant he went abroad in winter to Majorca and Spain, later Italy, which  resulted  in  large output. Married his RSA Tutor’s niece and they had 5 surviving children; it was daughter Theodora who donated his work to Annan. Became an RSA tutor himself, living in a fine house in Morningside. The local press was keen to report his presence here in 1879 when he came to draw the High Street in Dumfries for his retrospective view of Burns’ Funeral (top photograph).

In 1875 the family moved to London to West Cromwell Road and then to a fine house in Phillimore Gardens, Holland Park. He became part of an art circle, with friends like Alma Tadema and John McWhirter, but still had his Edinburgh base and kept up his foreign travel.   It was in Edinburgh in 1886 that he escorted the Queen around the International Exhibition and she greatly admired his Spanish paintings. He was a charming man, and she appointed him the following year to paint her Golden Jubilee.

GOLDEN JUBILEE AND AFTER.

Theodora Lockhart gave to Annan all the Jubilee letters and notes kept by her father in two large volumes, but no trace of them emerged from storage under the Town Hall when the museum was set up.  They contained evidence of the huge undertaking that those three years  became: there were endless sittings, many fitted in when visiting Royals were here, e.g. Grand Duke Serge of Russia, Indian princes etc.. He had a spy hole behind the high altar in the service and  based his work on a long view from there focused on the Queen in the centre with all her family round her. She and her daughter, the Empress of Germany, visited his studio and were pleased with progress. The toll on Lockhart was enormous, involving  letter writing,  appointments and  sittings  as well as painting.

The 1890s were years of great success mainly as a portrait painter, with many fine examples of  his work  eg in the Palace of Westminster is the portrait of Speaker Peel. He still  continued to exhibit   regularly e.g. at the Paris Salon Exhibitions, and at the 1901 Paris International Exhibition where his self portrait, wearing the gold medal from the Edinburgh exhibition of 1886, itself won a posthumous medal (bottom photograph).

His health never recovered both physically and mentally and in 1899 he had a mental breakdown and was admitted to the Bethlehem Hospital (Bedlam) where he developed pneumonia and died aged 54. He is buried at Brookwood Cemetery in Surrey with a fine Celtic headstone paid for by his artist friends. Rather fittingly he was working until near his death on Wedding at Gretna Green, which was never finished.

A postponed exhibition of Lockhart’s work took place in Annan Museum in the spring of 2021,  but this was not on the scale of the one we had in 1998. My book published then has now been much expanded to cope with all the new works which have come to light and the new information gathered.  It is on sale in Annan Museum 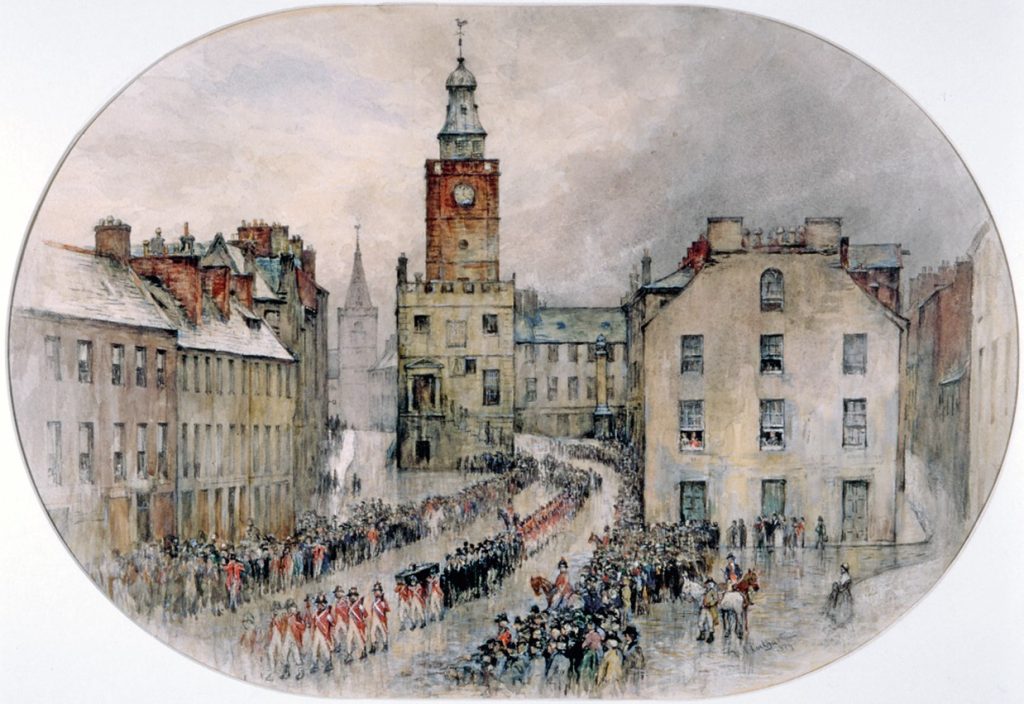 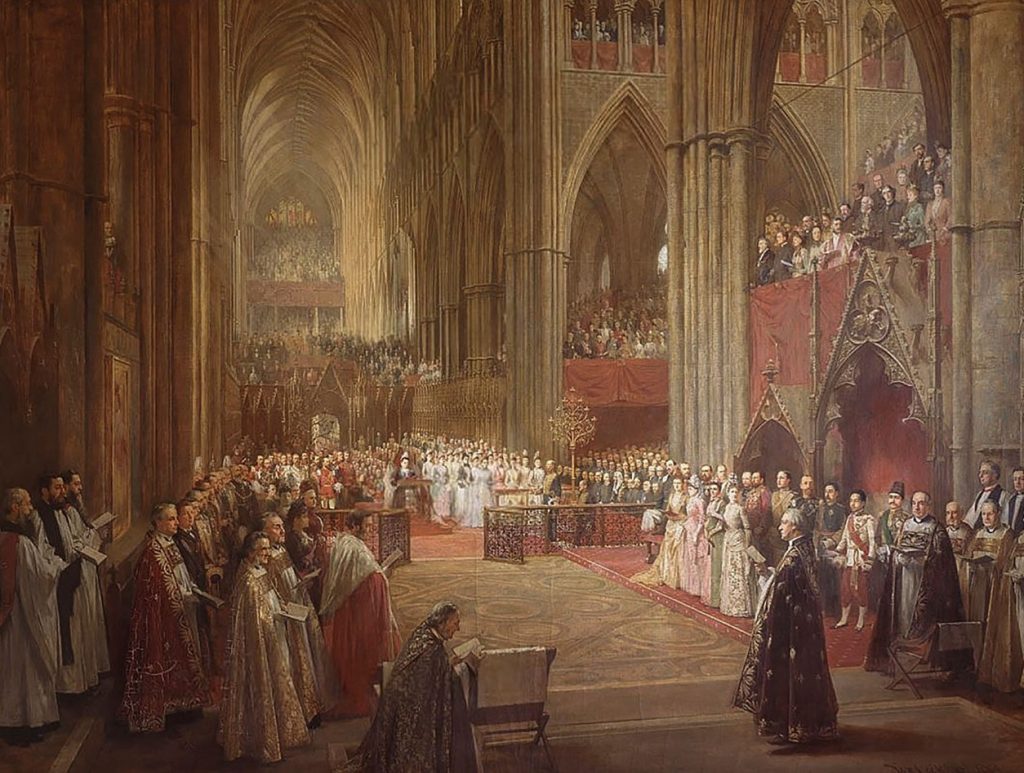 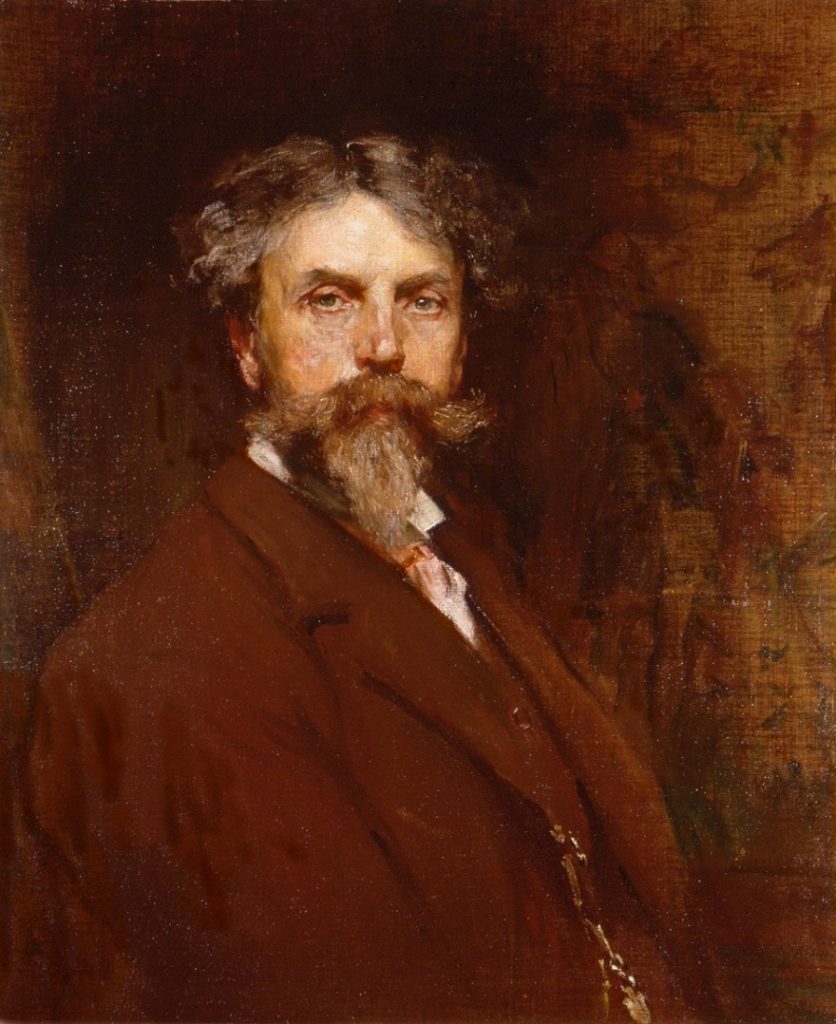 Dirom had the greatest influence of anyone on  the growth  of Annan.  A man of national importance, with connections to all the leading figures of Georgian Britain, soldier, MP, agriculturalist, engineer, builder, writer and  poet, Fellow of the Royal Society.  My book on him is on sale in Annan Museum.  He was born in Banff, and married  Magdalen Pasley, who inherited great wealth and Mount Annan estate,  and was cousin of  to the Four Knights of Eskdale, the Malcolm brothers,  with whom  Dirom fought in India .

Served in India as Deputy Adjutant General in the defeat of Tippoo Sultan and features in the painting of that event. Made Colonel in the Nile campaign and rose rapidly in the Napoleonic Wars to be Deputy Quartermaster for Scotland doing surveying, also  in charge of defence of N W Britain based in Liverpool. As County Commissioner of Supply  he considered   that invasion by the French was highly likely in SW Scotland because moving troops to defend the area was impossible given the state of the roads. He called his friend Thomas Telford to Mount Annan, whose career had been helped by Mrs Dirom, and together they surveyed the area and Dirom oversaw the work of building a new road, cutting 37 miles off the journey from Carlisle to Stranraer, along with building all the bridges needed to cross rivers.

He designed and had built the model village of Brydekirk, then Bridekirk, its bridge and new road system, cutting the travel time from Langholm to Dumfries.  It was the first model village in private hands in Scotland and was designed to use water power for mills and have good housing for workers, but no pub allowed!   Later Mrs Dirom paid for the church.

By surveying the land and being a geologist he was able to supply his building projects using stone quarries, brickworks, sawmills and a reservoir, and to improve his land with lime from limekilns.

This was the Agrarian Revolution and he spearheaded it here. He signed the petition for enclosure of common land, and introduced new farming methods e.g. his overseer at Mount Annan, Wm. Halliday, invented  the disc  harrow.   Dirom spent £3000 on improving his land.  Poor grazing for a few horses was turned into fields growing grain. He turned Annan from a  port importing grain into one which exported it.  He saw that Annan got its first bank, having seen what his friend Henry Duncan had done at Ruthwell.

From 1806 to 1811 he represented Dumfries at Westminster, rewarding the folk of Annan by giving them the silver snuff mull, still used today in Riding of the Marches.

Dirom led the turning of Bridge House in 1803 from a hotel into a school, Annan Academy, and Carlyle taught there. This was too small, so in 1891 he oversaw the purchase of a site in Ednam Street for the building of the next Academy.  Meanwhile his wife built a girls’ school in Annan and paid the salary of the teacher.

1 Brydekirk  village, bridge and church, a granddaughter is buried here.

3 Bridge House turned into a school

4 Annan Old Parish church: he was the main force behind  the building of it, and reserved the plot for the mausoleum which contains the bodies of him, his wife, and some  of his children and grandchildren. In the church is the memorial erected in memory of his daughter   Christina who died in Calcutta aged 26.

5 Mount Annan, once  called Cleuchhead,  renamed by the  Diroms who added a top floor. It was completely rebuilt by their grandson but burned down in 1926. The gates, lodge and stables remain. A dower house was built later, called Cleuchhead, overlooking  the river.

1 Robert Burns  was entertained at Mount Annan in 1795.

2 Henry Raeburn painted 4 portraits of the Diroms and their two eldest sons.

3 Thomas Telford, career launched by the Diroms and a long  time collaborator in  building of roads and bridges.

5 Thomas Carlyle, began his career as a tutor at Mount Annan to the elder sons, as did

7 James Hogg the Ettrick Shepherd, poet, wrote a poem on the deaths close together in Liverpool of two daughters of the Diroms, and  inspired Dirom to write verse. 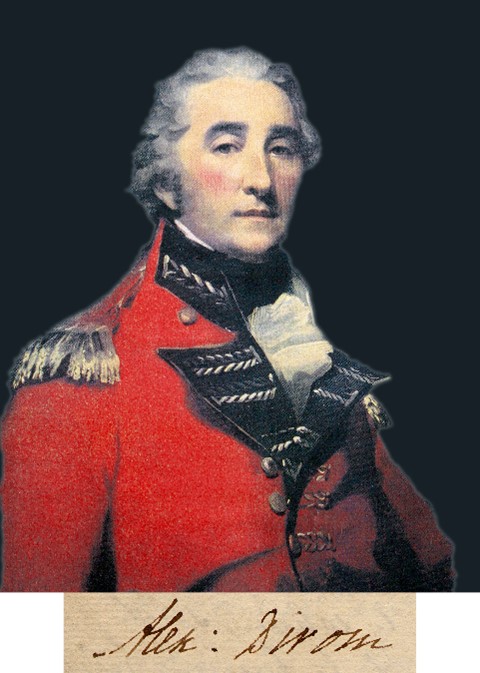