During WW2 the Royal Air Force underwent a period of expansion to increase the number of trained pilots able to participate in aerial conflict. They set up Operational Training Units (OTUs) to provide new fighter pilots and bomber crews with the chance to gain experience and learn tactics to fight enemy aircraft. Annan was chosen for one of these Operational Training Units and on 28th April 1942, planes began flying from No.55 OTU airbase, known as RAF Annan. The 200-acre site

had two runways, intersecting at right angles and three hangars. Basic accommodation was provided for staff and although they kept a small wood between the runways to camouflage the airfield it turned out to be a hazard for pilots flying their aircraft. The airfield was used for advanced training of Hurricane and Typhoon pilots and Hawker Typhoons were provided to familiarise pilots with advanced fighter aircraft. Pilots from RAF Annan were sent to No.59 OTU, a satellite airfield at Longtown, for advanced training.

Many of the pilots undertaking fighter training at RAF Annan were inexperienced and typically were aged 19-20 years old. They came from Britain and other Commonwealth countries such as Canada, Australia and New Zealand. Other servicemen came from allied countries, including Holland, Poland and Czechoslovakia and in 1942 the first American pilots arrived at the base. Many of those stationed in Annan did not have any designated accommodation to stay in. A large number boarded with local families and developed many strong, lifelong friendships and sometimes even married local women.

Several foreign pilots lost their lives while training in the area and RAF Annan log books give some of their details: American Pilot Officer killed at Limekilns, 2 miles N.W Annan; Hurricane crashed near Longtown; New Zealander killed when he blacked out on dogfight practice; American Sgt killed at Kirkpatrick Fleming; American Sergeant killed in crash on Bewcastle Fell; mid-air collision between 2 Hurricanes, and American Sergeant killed near Blackford, Cumberland. Many of the pilots killed are buried in Annan Cemetery in marked Commonwealth War Graves.

RAF Annan’s high number of accidents and collisions were caused both by natural and mechanical issues. As well as the weather causing problems the geographic location of RAF Annan was often difficult to spot for young trainee pilots and mechanical problems arose from aircraft that had been used operationally and were suffering from wear and tear.

RAF Annan employed 400 personnel, including a branch of the Women’s Auxiliary Air Force. These women would be based in their own accommodation in huts on the base. The WAAFs were in the south camp, separate from the men in the north camp. At Annan, the WAAFs had various roles; plotters in operations rooms, communications duties using telephones and telegraphics, analysing aerial reconnaissance photographs and performing general catering or transport duties for RAF personnel. Each WAAF would get their own bicycle to get around the site and visit local villages often visiting Annan for shopping and entertainment.

Some famous names of the 1930’s and 40’s were based at Annan including Glaswegian boxer Jackie Paterson. In June 1943, he became the World Flyweight Champion after beating Peter Kane in just 61 seconds. Jackie continued to travel the country to fight while stationed in Annan but took every opportunity to train in the gym hall at RAF Annan, sometimes sparring with the local children who would gather to watch the boxer.

Although never based at RAF Annan, Francis Grant Rumble was a local pilot from Kirtlebridge who took part in the Dambuster Raids of 1943 which successfully ruptured the Möhne and Edersee Dams in Germany.

RAF Annan and its pilots had a dramatic impact on the local area –  aircraft could be seen flying at low altitude and performing manoeuvres including climbs, turns, mock strafing and barrel rolls. The sight of such aircraft excited locals, land girls and POWs who witnessed the spectacular flying while working in the local fields.

In January 1944, RAF Annan underwent reorganisation because of a surplus of fighter pilots. It was re-designated as a Tactical Exercise Unit (TEU) and consisted of ‘A’ ‘B’ and ‘C’ Squadrons. ‘A’ Squadron specialised in air gunnery, rocket firing, dive bombing and tactical bombing in formation. ‘B’ squadron was detached to the site at Great Orton, which had replaced RAF Longtown and concentrated on army support and ground attack tactics in preparation for the allied invasion of Normandy. ‘C’ Squadron specialised in tactical bombing formation, convoy attacks and low-level flying. In May 1944, the Typhoon conversion squadron moved to Warwickshire and the remainder of the TEU was transferred to Gloucestershire in July 1944. After this, Annan saw little flying and was handed over on 17th August 1944 to 40 Group, Maintenance Command, with the site becoming a detached storage site for 14 MU at Carlisle until August 1952.

With the Second World War over in 1945, the dawn of the Cold War led to the demand of nuclear power stations in Britain to produce Plutonium for a British nuclear bomb. The decaying buildings and runways of RAF Annan were seen as a key location for the construction of Chapelcross Nuclear Power Station from 1956 and the site continued to be a vital part of the Solway Military Coast. 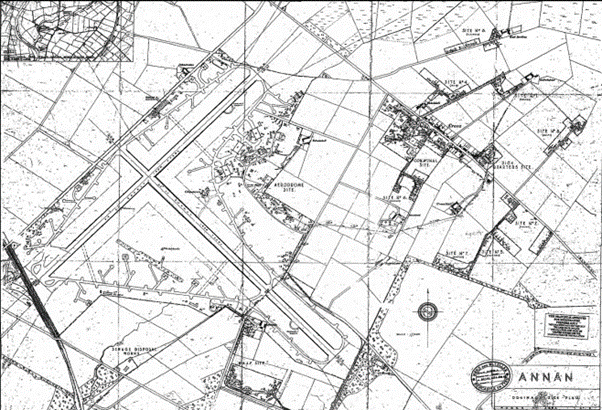 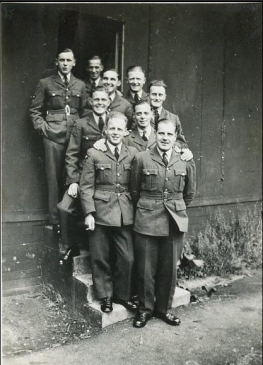 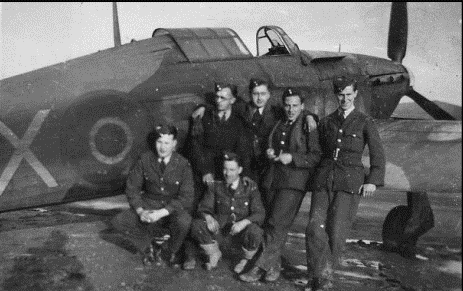